It was a long-held belief that chocolate and acne were not connected in any way. We shall look into how this belief came about real soon.

The real answer to the question of whether chocolate causes acne is that it depends on whether you are acne prone or not. If you are not acne prone no amount of chocolate will cause acne. Don’t you know someone like that who eats loads of chocolate and has clear skin? I certainly do. Annoying isn’t it? If chocolate on its own could cause acne, then almost everyone in the world would have acne.

Now if you are acne prone does chocolate make your acne worse?

First, let’s figure out why for years there was thought to be no link between eating chocolate and acne

In 1969 a study was conducted by Fulton to study the link between chocolate and acne. 65 subjects with moderate acne were assigned to consume either a chocolate bar that contained 10 times the amount of bittersweet chocolate of a normal 45 gm bar or a chocolate-less placebo bar. The lesions on the faces on the subjects were counted before and after ingestion of the chocolate bars. The results showed no significant increase in acne amount the 2 groups that consumed the 2 bars. From this study, it was concluded that there was no connection between chocolate and acne.

This study, however, had a lot of flaws. The main flaw is that the study was made possible by the Chocolate Manufacturers’ Association of the USA. Source.

Let’s have a look at normal milk chocolate

Another study was conducted in which 54 college students both male and female between the ages of 18 and 24 were invited to participate in this study. They were divided into 2 groups. One group was given milk chocolate and the other group was given jelly beans. The acne lesions were counted at the beginning of the study. After 48 hours the acne lesions were counted again.

Then for 4 weeks, both the groups were given nothing.

At the end of the 4 week period, the groups were switched. So the group that got jelly beans in the previous round now got the chocolate. After 48 hours the acne lesions were counted in both groups. 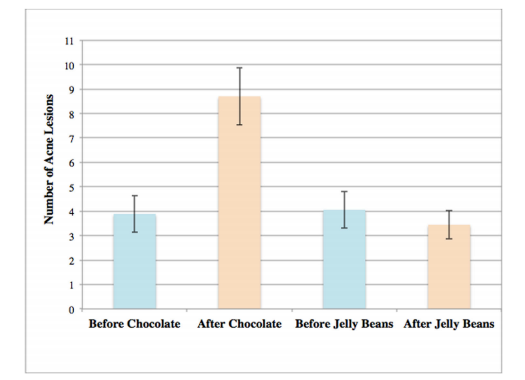 So why does this happen?

Chocolate flavonoid consumption modulates cytokine production, which may account for these observations. Netea et al demonstrated that chocolate consumption primed human blood mononuclear cells to release more proinflammatory cytokines, interleukin-1β, and TNFα, upon stimulation with Propionibacterium acnes. Because over-inflammation is an important contributor to acne pathogenesis and the anti-inflammatory dose effect of antibiotics has been demonstrated to be most effective in treating acne, it is plausible that altered cytokine profiles can contribute to worsening acne. Source

So yes milk chocolate will make your acne worse

How about dark chocolate?

This study was done to study the effect of 99% dark chocolate on acne prone skin. For this study 25 male subjects were asked to consume 25 grams of 99% dark chocolate daily for 4 weeks. Acne lesions were counted weekly. A record was kept of the diet and daily activities of the subjects. The acne lesions significantly increased as early as 2 weeks into the study. At 4 weeks the lesions were much more than at the beginning of the study. This study proved that even dark chocolate can increase your acne if you have acne prone skin. Source

How about cocoa powder?

In 2014 yet another study was conducted testing the link between cocoa powder and acne. 14 men between the ages of 18 and 35 with a history of acne were selected to participate in this study. They were assigned to swallow capsules with unsweetened 100% cocoa, gelatin powder or a combination of the 2.

It was found that the subjects who took pure cocoa capsules saw a significant increase in their acne. The conclusion of this study was that in acne prone individuals consumption of chocolate makes acne worse. Source

So does chocolate cause acne?

As you can see from the studies conducted above, the answer is if you are acne prone, yes.

So what does mean for you if you can’t give up chocolate? Well, you can try your own experiment. If there is one thing I have seen, is that we react differently to foods.

So keep a journal and note down the condition of your skin. Eat a piece of chocolate of your choice and observe what happens. Document everything you eat as well. It won’t be perfect but at least you’ll figure out if chocolate affects your skin or not.

This site uses Akismet to reduce spam. Learn how your comment data is processed. I’m Anjali and I’m going to help you clear your skin of acne. I suffered from acne for 20 years before I discovered that the secret to clear skin was much simpler than I had ever imagined.

2 Skin Hacks to Clear Your Skin!